From the blower motor to the thermostat, there are many important parts in an HVAC system. In most cases, you don’t need to fret over what’s inside your unit, but there is one part that deserves serious consideration. That would be the compressor.

While we aren’t going to debate brands or styles of compressors, we are going to touch on the stages.  Choosing between a single, two-stage, or variable-capacity compressor will have a great impact on the cooling efficiency of your unit as well as its overall cost to operate.

All three types of compressors below will function in a similar fashion in regards to how they work with your system as a whole. The differences can have a huge impact on which unit you should buy, however, as well as your overall savings.

​Single-stage compressors are the most common in American homes, especially older ones. While affordable and a standard for millions of Americans for decades, this type of unit always runs at full speed… all the time.

Dual-stage compressors are the next step up as they have low and high capacity compared to single-stage systems that are locked at 100%. The capacity can vary by model, although it’s better to think of these compressors as having a high and low.

These units won’t run continuously and don’t cycle on as much as a single-stage compressor. It can run at a low speed, which requires less energy when the heat isn’t as intense, but you still want to stay comfortable indoors. It can also go full blast when the temperature rises in the middle of summer, so you’re getting the best of both worlds.

As the name implies, a variable speed compressor in your system will run at varying speeds. If you need it to run on full power when it’s 95 degrees outdoors, it can do that as you’ll get a steady stream of air regardless of the temperature.

These systems provide homeowners with a wide range of capacities considering they don’t cycle on or off very often like a single-stage unit. That means variable speed compressors don’t have to work as hard in order to reach their maximum potential. 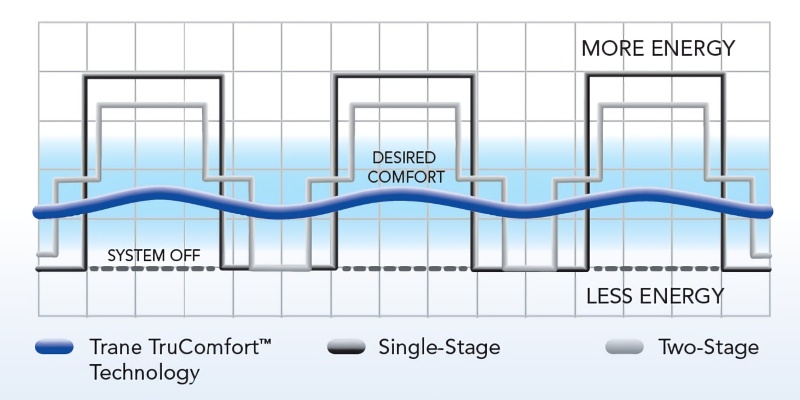 Performance and efficiency is an area where multistage and variable speed compressors shine. As a single-stage compressor only has a single speed, which is 100% capacity, they aren’t going to be as efficient. Cycling on and off throughout the day actually consumes more power than while the system itself is running, even when you only have to move the dial one degree. Think of it like driving at full speed when you only need to go a few feet, not several miles.

Lennox and other manufacturers do make some very efficient single-stage units, but they don’t measure up to a multi-stage system. Variable speed units are the most efficient although not necessarily the best option overall. If you live in a region where you don’t experience many temperature swings, a variable speed compressor may be overkill, although they bring other benefits to the table.

One thing most homeowners overlook is humidity. It’s something that can turn a basement full of ductwork into a haven for mold. High humidity and moisture in the air can also make you feel clammy while the AC runs, which isn’t exactly comfortable.

How your AC unit performs has a lot to do with humidity, but the compressor plays a large part in that as well. A variable-speed compressor runs longer which helps dehumidify your home whereas a single-stage compressor and its short cycles can have the opposite effect. Multi or dual-stage systems provide a nice compromise between the two.

Indoor air quality or IAQ is something you’ll hear a lot about when shopping for flooring or filters for your HVAC system. A good filter can help keep all kinds of nasty particles out of your airflow, but the compressor has something to do with that as well.

When your unit is off, air doesn’t pass through the filter in your system until the compressor kicks on. With a single-stage system, that can be frequently, but it will only be for a short amount of time as it runs at full speed.

Multistage compressors will give you a little more leeway with their runtime, but a variable speed compressor supplies your filter with a steady stream of air. In turn, the air quality in your home will stay fresher as long as you have a good filter and remember to change it accordingly. The right system can help keep the dust mites down and insects at bay as well when the humidity levels are kept in check.

This is the one area where all three types of compressors are neck and neck. Your central heating and air unit should never be loud enough to scare children or send you running outside in fear. They can squeak and get a little noisy when not properly maintained, but the best HVAC systems certainly won’t wake you from a slumber.

With that in mind, it depends on where it’s placed, and a variety of factors can also play a part in noise levels from ductwork to loose floor vents. With compressors, the decibel level is going to vary depending on the speed and capacity.

A single-stage system tends to top out at around 75 decibels, while a two-stage unit will be a little quieter as it can run at lower speeds. Variable speed compressors can be just as loud as the other styles at full blast, but quieter considering its incremental nature allows you to go lower.

While the decibel level was close between the three types of compressors, this is an area where the units really start to separate themselves. With pricing, you have to consider the cost of the actual unit and the cost to operate it along with the price of maintenance over time.

In our piece on finding the right SEER rating, we discussed energy savings, and how a unit with a higher SEER rating can cost considerably less to run. The upfront cost of a variable stage compressor will be more than a single or two-stage compressor, but both styles will save you more money in the long run. Single-stage systems are obviously the cheapest although they can cost more to maintain over time.

With maintenance, the simpler the unit, the less expensive it will be to work on. That means variable speed compressors will cost more to maintain than the other styles, and you can expect to pay more for parts and labor as well.

While you always have to account for SEER ratings and conditions that can affect your home, choosing the right stage system for your home isn’t difficult at all. Once you consider the factors we’ve covered along with your climate, the decision should become simple.