Payne is another classic All-American brand that has been around for longer than most folks can remember. They are also one of the more popular manufacturers of heating and air products in the United States. In other words, a brand consumers know and trust. Where some companies tout flagship features and cutting-edge technology, Payne relies on pricing and efficiency to move their HVAC units.

The History of the Payne Air Conditioning Company

Payne Heating and Cooling have been in business since the early 1920s when they began producing gravity-type furnaces. The company introduced perimeter in zone heating in the 1950s before expanding throughout the 80s and 90s into a major force in the HVAC industry.

Today, Payne is still cranking out central air conditioning units and heat pumps although they are now owned by United Technologies. They are a company you may be familiar with considering they also own Carrier and Bryant. That means many of the components will be the same between the three companies although there are some significant differences with Payne’s lineup on central air conditioning systems . 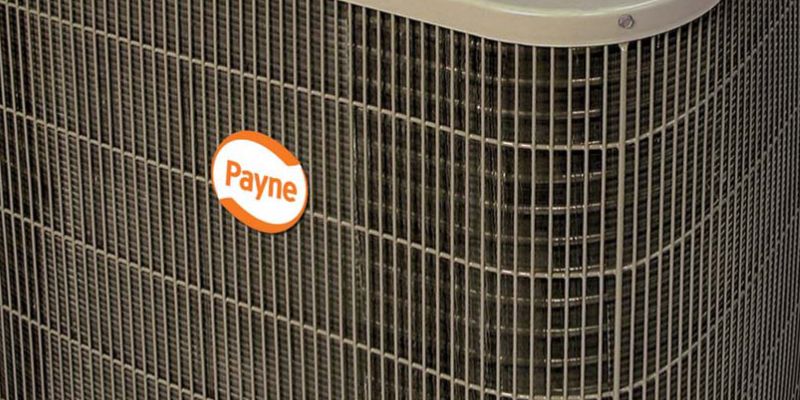 We don't want to say that Payne doesn't offer any unique technology, but that's more or less the case. You aren't going to see any literature about variable speed compressors or high tech thermostats on their website or in their literature.

The company’s HVAC units do not have any of true “flagship” features although all models are durable with a standard set of features found on most mid-range central air conditioning systems.

Payne’s catalog of central air conditioning units is easy to browse; there just aren't many models to look at. At this time, they have six models available including one that's a variant. There are no variable speed systems in their catalog currently and you'll only find one two-stage system with the Payne PA17NA.

The Payne PA17NA is the company's top model. It's a two-stage AC unit with a rating of 17 SEER and a decibel rating of 73dbA. It has a high-efficiency scroll compressor with a single-speed fan motor and uses non ozone-depleting R-410a refrigerant. This unit is energy star qualified just like the company’s single stage systems which are rated at 17 SEER.

The Payne PA16NW and PA16NA are both single-stage systems with a rating of up to 17 SEER. At first glance, there does not appear to be a difference between these two units, and you won't notice any major differences with the specifications either. The PA16NW is rated it 73 decibels, however, which puts it in line with the Payne PA17NA. The Payne PA16NA is slightly louder with a decibel level of 76dbA.

There are also two models from Payne with a SEER rating of 14, but different model numbers. That would be the Payne PA14NC and the Payne PA17NA. Both units have single-stage scroll compressors, and they are available in the same sizes at 2.5 to 5-ton as well like most of the company's units. In fact, they even have the same decibel rating of 75dbA, but neither AC unit is Energy Star qualified.

Almost every central air conditioning manufacturer has a unit rated at 13 SEER, and Payne is no different. The Payne PA13NA is their most budget-friendly model, but one with the same features found of units with a higher SEER rating. This single-stage unit is rated at 74dbA as well, which makes it efficient and relatively quiet.

Which Payne AC unit offers the best ROI for your home?

After you’ve looked over a brand’s air conditioners and have settled on a line, your next step is to think about the SEER rating along with the ROI. While you can handle both calculations yourself with enough data, they are tricky to understand due to the number of factors involved. If you can come up with a few simple figures, including your yearly cooling hours and square footage, our tool will help you calculate the ROI.

As mentioned, one of the draws of Payne central air conditioning units is the companies price points. Even though their units use many of the same parts that are found on other systems from United Technologies, the company’s systems are considerably cheaper.

If you can do without some bells and whistles, you can purchase a unit from Payne for around half the price of some of their competitors units. Once you factor in savings programs and potential credits, you may be shocked to see just how budget-friendly these systems are.

Just like the company's catalog itself, Payne's financing and rebate programs are rather simple. If you want to finance your new air conditioning system, you’ll need to get in touch with a Payne dealer for more information unless you want to use a different method of financing on your own. Alternatively, you can head over to the DSIRE database to find incentives for systems in your area.

Payne has a standard warranty policy on all of their central air conditioning systems. It's in line with the competition to a degree as you will receive a 10-year guarantee on parts under their limited warranty. Certain components may have coverage for slightly longer but in most cases, general components and parts are covered under their 10-year policy.

How to find an Installer for your Payne AC unit

Buying a new air conditioning system is only half the battle. You still have to have the system installed, which can cost as much as the unit itself in some cases. The size of your home and a half dozen other factors all come into play with HVAC installation, which is one reason that it’s something better left to professionals. If you'd like to get an idea of how much it would cost to have a Payne central air conditioning system installed, our quote tool will help you find a professional in your area.

Payne is an interesting brand in the AC world, and one you should definitely take notice of if you are in the market for a budget-friendly air conditioner. Most of the reviews from consumers and homeowners we read were positive, with the only drawback being the lack of variable speed compressors. If you don’t need high tech features or a high SEER rating, you will want to consider a unit from Payne.