York is a brand under Johnson Controls that produces mini-split systems, heat pumps, and air conditioners along with other HVAC equipment. The company itself has been in business since 1874, and their systems are engineered and assembled in the United States.

In our York air conditioning review, we are going to break down all the models in their current air conditioning series. Our guide will also let you know how the company’s policies and standards compare to other HVAC companies like Bryant and Lennox. 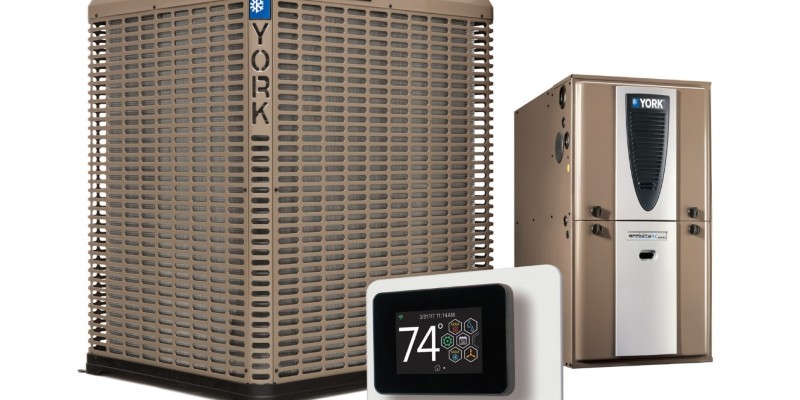 York AC units and heat pumps are filled with a variety of features and tech. You’ll only find these features on their premium series and best air conditioners, but they are well worth a look if you appreciate high-tech bells & whistles.

This built-in feature is only available on premium variable speed units from York’s Affinity line. Charge Assurance makes determining refrigerant levels simple. It confirms your new unit is properly charged when installed, and a digital display allows an HVAC contractor to evaluate the state of your system with ease.

Integrated monitoring is another perk of this system. When your York air conditioning unit requires an adjustment, you’ll get a notification. If you have a technician monitoring your system as well, they will also get an alert, which allows them to access and address any issues quickly.

Climate Set serves two purposes. It allows an HVAC contractor to set up your system quickly but also increases energy efficiency. This system has three “climate settings” with normal, dry, and humid which can be set based on the area where you live.

This allows your technician to get your new AC system up and running quickly and also improves efficiency. This technology also allows the indoor blower to work in conjunction with the compressor outdoors.

York’s central air conditioner systems are broken down into two basic categories depending on your needs. Their Affinity series AC units are the company’s flagship line, while the LX series features their most affordable and popular air conditioning units.

The Affinity series from York features two units with the York YXV and the York YXT. Both are in the “Premium” class, although one system has more features than the other. That would be the YXV, which sports a 21 SEER rating and is ENERGY STAR compliant.

The York YXV is a variable speed system and features every special tech the company has to offer. That includes Charge Assurance and Climate Set along with QuietDrive, which keeps the decibel levels low and vibrations to a minimum. It also has a tube-in-fin coil and ClimaTrak, which can fine-tune your blower for maximum comfort and efficiency.

While you only get QuietDrive and ClimaTrak on the York YXT, it’s still a smart system that’s quite capable. This two-stage unit can communicate just like its premium sibling, but it has a slightly lower rating of 19 SEER. The variable-speed compressor is the biggest difference between these two central air conditioning units.

The LX series provides homeowners with units that are a bit more affordable, but not quite as powerful. It’s broken down into two sections with LX Advanced series units and LX Series Economy class systems. With the Advanced class, there are two systems, both of which have a SEER rating of 17. The York YFK is available in 2 to 5-ton sizes, however, whereas the York YCG goes a little lower at 1.5 to 5 tons.

The York YFK has the same tube-in-fin coil found on the premium series and is a two-stage system. The JFK is single-stage with a MicroChannel coil, but both are ENERGY STAR efficient. The York LX Economy series are all single-stage systems with a similar set of features. These units range from 13 to 14 SEER and are sized between 1.5 to 5 tons.

York AC units are priced by the size and series. A 13 SEER system from the budget class won’t set you back as much as a system from the Affinity series, but you also need to factor in the cost of installation as well. On average, you can expect to pay around $1,200 to $2,400 for a unit depending on the system you have your eye on. Overall, York units are cheaper than larger brands like Trane.

Which York Model Can Offer The Best ROI for Your Home?

After you’ve looked over a brand’s air conditioners and have settled on a line, your next step is to think about the SEER rating along with the ROI. While you can handle both calculations yourself with enough data, they are tricky to understand due to the number of factors involved. If you can come up with a few simple figures, including your yearly cooling hours and square footage, our tool will help you calculate the ROI.

Like most manufacturers, York provides homeowners with several ways to save money by choosing their systems. Unfortunately, they don’t have as many programs or resources available as some companies, although they do offer financing through Synchrony Financial. The best way to save money with York is through finding the right dealer and using the DSIRE database which features incentives by zip code.

While you always need to read the fine print, we feel that York’s warranties are fairly straightforward compared to other brands. They work on a tiered system, as well. With all of their central air conditioners, you’ll get a lifetime limited warranty on the compressor, 10 years on parts, and 1-year on labor. You can extend that coverage through additional programs as well.

Unlike other household systems, once you find an air conditioning unit, you have to pick someone to install it. In most cases, there are two options as you can use someone from the dealer you purchased your unit from or hire an independent HVAC contractor.

With York, you’ll get access to Certified Comfort Experts, otherwise known as CCE contractors. When you go with one of their experts, you’ll also get a 100% satisfaction money-back guarantee with your installation from a NATE-certified technician.

Alternatively, in many regions there are dozens of contractors willing to take on the job. If you decide to hire an independent HVAC technician, always ask for references and never settle on the first bid.

York is a well-known name in the heating and cooling work with a solid selection of air conditioners overall. That said, as you can see in our York air conditioner review, they don’t have as many premium units as other brands. There’s only one variable speed system currently available, and the majority of their product line is the mid-range to budget class. It shows in their pricing, however, as you won’t need to break the bank if you need a simple system – not one that’s connected.